I couldn’t believe what I had done. I’ve never used my powers before, and now I never want to use them again. Cherry’s life had been ruined after what I did to her. Her friends shut her out, no one would talk to her, and once word got to her parents about what she told, they shut her out too. She had no one, and it was all my fault.

I was an awful person. Fairies are supposed to use their powers for good, and what I did wasn’t good at all. I finally felt like every terrible thing Cherry said to me was true. I was filthy. I was a Mutt. And I definitely didn’t deserve to live after what I did. 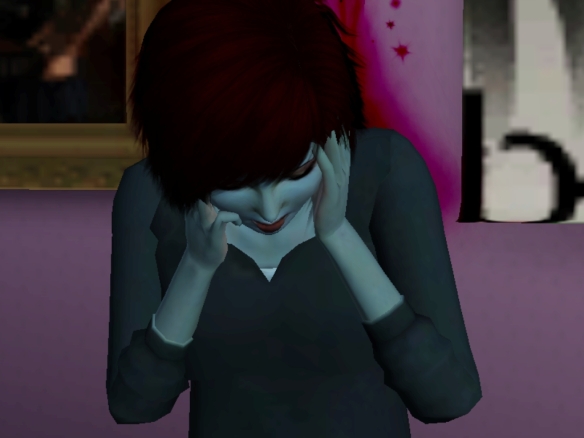 I was scum. I ruined an entire family. After what happened, the school made us all write statements for the police. They were investigating the hybrid-baby case, they were trying to find out if they really killed the child or just told Cherry that they did. So far, it looked like they did. And that meant that they’d be going to jail. It was all my fault. This would’ve never happened if I hadn’t let my emotions get the best of me.

I was so absorbed in my thoughts, that I didn’t even hear the door open.

I jumped a little when Mom sat down on my bed.

“How’re you doing baby?” She asked, her voice full of concern. She should be angry at me, after what I did. She should’ve expelled me and grounded me for life. But instead, she suspended me for a few days so I could relax. She was going way too easy on me.

“It doesn’t matter how I’m doing.”

“Of course it matters, sweetheart.”

“Mom, I don’t deserve sympathy. You should be asking Cherry if she’s okay.”

“Baby, what happened wasn’t your fault. Your powers are a lot stronger than we realized, and when you got angry you couldn’t control it anymore. There was nothing you could do.” She tried to comfort me, but I knew she was wrong. I could’ve controlled it. I could’ve prevented the whole thing, if I hadn’t confronted her this would’ve never happened.

“So now what do I do?” I didn’t have the energy to keep protesting.

“I’m working on that. Since you’re the only one with powers like this,” She chose her words carefully, she didn’t want to say anything that would trigger me. “we don’t know much about them. I can arrange for you to have a teacher to help you discover your powers and how to use them properly.”

“I know you’re upset, but you might change your mind. Let me know, okay?” She asked, and I gave her a small nod. “Good. So, Dad and I are going out tonight, but if you need anything your sisters are here and Aunt Fern and Uncle Palm are just across the street, okay?”

It was my first day back at school after my suspension. I hadn’t talked to anyone outside of my immediate family since the incident, and it was obvious my friends were walking on eggshells around me.

“So are you guys ready for the test today?” Venus tried to take all our minds away from the incident. We knew Cherry would be arriving any minute now, and things were tense.

Every time the front doors would open, everyone would look. We were all nervous about what would happen. But she hadn’t shown yet.

And when she did show, she was hardly recognizable. Her usually voluminous hair was flat and straight. She was wearing sweatpants and a sweatshirt, not her usual cheer uniform. Her make-up was smeared, it was obvious she’d been crying this morning. 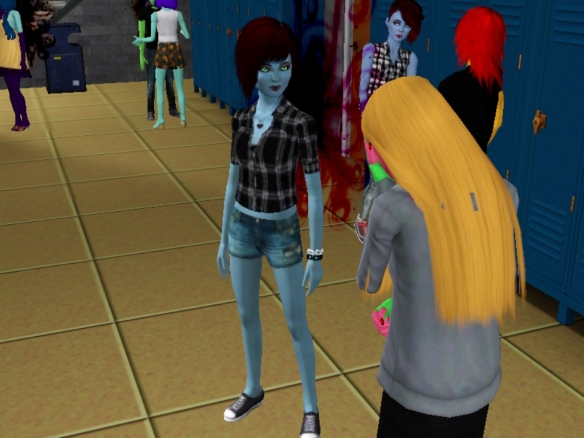 “Cherry.” I approached her cautiously, I didn’t want to upset her.

“Go away.” She buried her face in her hand.

“Leave me alone!” She screamed, and ran off. I stood there, feeling like I was about to breakdown. I wasn’t going too, the entire school was staring at me and I wasn’t about to cry openly like that. But I still felt like I would.

Venus came up behind me and wrapped her arm around my shoulder. “C’mon, let’s get to class.”

Between classes, I stopped to use the restroom. I had started to tear up during the test, and I was worried my make-up was smudged. 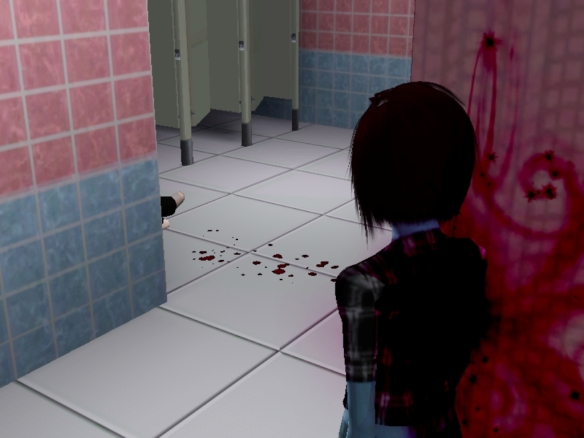 I was expecting the bathroom to be empty, they usually are during passing periods. But the bathroom wasn’t empty. It took me a moment to realize what was all over the floor.

There was a trail of blood, leading from the sinks to the stalls.

“Hello?” I called out nervously. I walked slowly over to the stalls, fearing what I would find on the other side of the wall.

The trail of blood led to a slumped over Cherry. Her wrists were soaked in blood, and I realized what had happened. Cherry had tried to commit suicide.

Everything felt like I was moving through quick sand. I ran over to Cherry, screams filling the bathroom. I didn’t even notice I was the one screaming.

I took Cherry into my arms, not caring that I was getting blood all over my bare legs.

“Cherry, please wake up. Please. I’m so sorry.” I repeated that over and over, I didn’t want her to die. Yes, she had been a total bitch to me, but she didn’t deserve to die.

Before I knew it, I was being pulled off her by a teacher. The last thing I heard before collapsing was the screams of my peers as they rushed into the bathroom.

They were too late, they couldn’t save her. Cherry died, and it was all my fault. I caused a girl to commit suicide. I was scum.

I wasn’t entirely sure how long it had been since she died. I was constantly in and out of consciousness, I’d sleep through the day and be awake all night. I completely stopped going to school, my grades were dropping so low my best option would be to drop out.

My time was spent wondering through the house. I’d usually end up in random places, like the garden or the front porch. Right now, I was currently sitting in the bathtub.

My family kept trying to talk to me, but I didn’t listen to them. Nothing they could say would make this any better. No matter what they said, a girl was dead because of me.

Right now, it was Iris who was trying to get through to me. Usually, I never responded to anything they said, but today I felt like I should say something.

“Jazz, you really should come back to school.” She sighed and rested her head in her hands.

“Why? I’ll just fuck up again and make someone else commit suicide. It’s safer for everyone if I stay here.” I said, she jumped in surprise, not expecting me to respond.

“Because, if you don’t go back soon, you won’t be able to graduate. You’re so close to graduation, you shouldn’t mess it up now.”

“I can’t go back.” I glanced over at her. “It doesn’t matter, I’m gonna be eighteen in a month. I’m gonna leave here, so no one can get hurt because of me again.”

“But where will you go? We can’t leave the Valley.”

“You gotta at least try.” She climbed off the toilet and crouched down in front of me.

“If you leave, Mom will never forgive herself if something happened to you. You know what happened with her parents and her first husband.” She frowned before standing up and leaving me alone in the bathroom.

I’d never forgive myself if something didn’t happen to me. I didn’t deserve to live, I hope something terrible happens to me when I leave.

6 thoughts on “Jasmine Fae Chapter 4: What Have I Done?”