Warning: There’s blood in this chapter, don’t read if blood is triggering to you. Thank you. 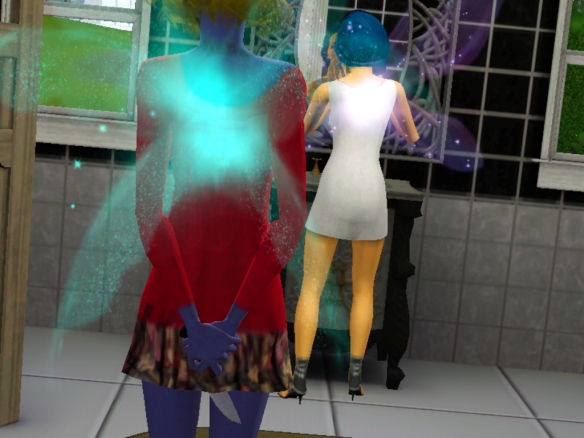 “I really think you could use my help.”

“It’s really not necessary Clover, I’m almost done.” I replied, not noticing her coming closer and closer to me. She gripped my shoulder hard and pulled me around roughly.

“Hey what the-” I started to say, before I noticed what she held against my throat. It was one of our knives from the kitchen.

“I think you do need my help.” She laughed manically. “This date is with River, yes?” I didn’t answer, but I think she could tell from my fear that she was right. “He’s just going to hurt you. If I kill you now, you won’t get hurt later. River is a terrible person, Tulip. But you aren’t much better. You stole him from me. He was mine, and you took him from me. If I kill you right now, it’ll do both of us favor. Now, if you scream it’ll only make it worse.” 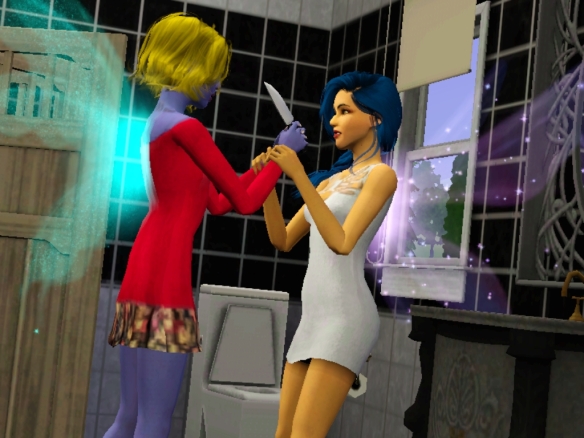 She started to move the knife closer to my neck, but I grabbed her wrists before she could do anything.

“C’mon Clover. You don’t want to kill me. I know you’re upset with me, but that’s no reason to commit murder. You don’t wanna be locked up for the rest of your life, do you?”

“Oh don’t play dumb. You and I both know I killed Gardenia. You saw me putting the knife back. They’re closing in on me, and I might as well just finish what I started.” She giggled, breaking free from my grasp. She was right, I saw her putting the knife back in the knife holder. I never said anything out of fear she would hurt me. So much for that.

“Please don’t.” I whispered, my voice hoarse. I didn’t want to die, not like this.

Before I could defend myself she jabbed the knife hard into my stomach. I screamed out from the pain, hopefully alarming River. I could probably survive one stab wound, I just needed him to get here before she could do anything else. But she was too fast. She pulled the knife out of me, my wound starting to pour blood. I looked her in the eyes, begging her with them to stop. She didn’t. In fact, she smiled at me, and stabbed me again. And again. In different places all over my body. I was losing blood, and I was losing it fast. There was no way I could defend myself.

When she finally stopped, I couldn’t even stand. I was surprised I was even still alive, but she never stabbed my heart. She stabbed me too many times, I knew I wasn’t going to make it. I was going to bleed out on my own bathroom floor. 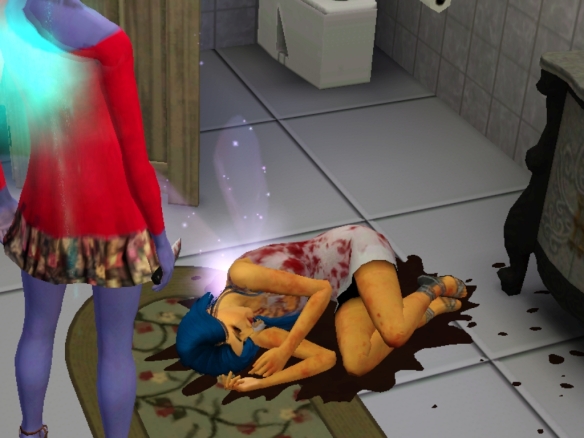 I curled into a ball, while laying in a puddle of my own blood. My vision was starting to fade, so I closed my eyes. The last thing I heard before I faded into the blackness was Clover’s maniacal giggles.

I was getting ready in my room when I heard a scream coming from upstairs. Tulip screamed often, she was a tough woman but she was easily scared by bugs. I put my pants on and headed upstairs to see what was wrong.

I was taking my sweet time with the stairs to avoid getting sweaty before my date. But by the time I reached the top, I heard a thud come from the bathroom. 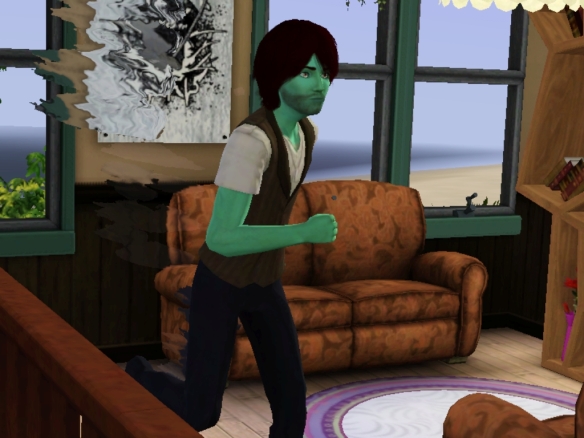 As soon as I reached the third floor I took off running for the bathroom. My mind was racing with scenarios of what I could find behind that door. She could’ve slipped and hit her head. Or maybe she was feeling faint. Even with my vampire speed, it seemed like the distance between the staircase and the bathroom stretched on for miles. 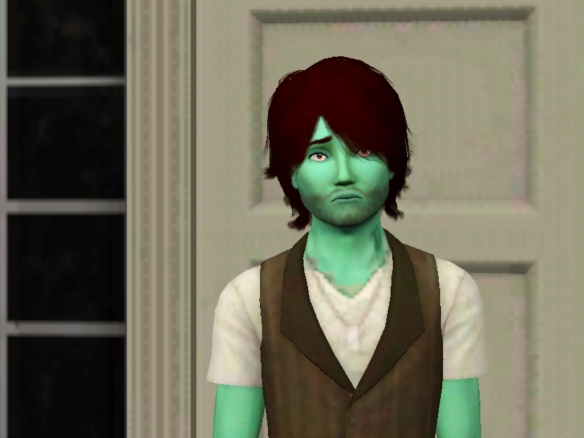 When I swung open the bathroom door, it took me a few seconds to register what was going on. Tulip was curled up on the floor, covered in what looked like blood. To my left, Clover sat on the bathtub. She held a bloody knife lazily against her face.

I went through a range of emotions in a matter of seconds. Shock, anger, rage, sadness, and finally panic.

“River, she’s not ready yet! How could you just barge in here while she’s getting ready for your date?” Clover giggled. She licked the blood off the knife while keeping eye contact with me. 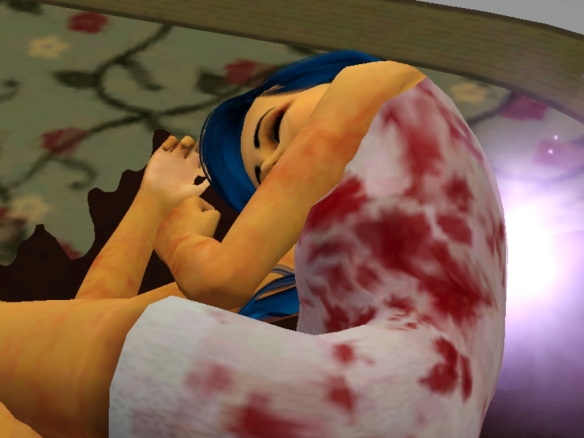 “But now that you’re here, don’t you think she looks lovely? I thought the dress could use a little something more, and now it looks fantastic. Don’t you think so?” She obviously had gone insane.

I panicked, and backed up straight into the door. My hand searched frantically for the door nob, and when I finally found it, I swung the door open as fast as I could and ran out. 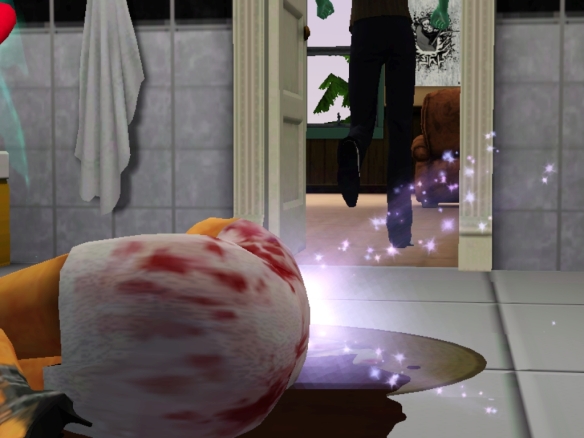 I knew that the image of Tulip lying on the bathroom floor would never leave my mind.

I ran into my room and locked the door. I didn’t hear footsteps behind me, she wasn’t following me. I sank to the floor, my entire body started to go numb.

It took me a few moments before I realized I needed to call for help. My cellphone was thankfully in my pocket, so I dialed 911 and curled up into a ball. “9-1-1, what’s your emergency?” A kind woman’s voice asked.

“M-my ex-girlfriend stabbed my current girlfriend. I think she’s dead. I need help.” I frantically explained into the phone. I gave her my address and she said help was on the way.

I could already hear sirens as soon as I hung up the phone. In this moment I was extremely thankful I lived in such a small town. It was only minutes before I heard multiple footsteps run through the house. I yelled out to them, telling them they were on the third floor.

The only thing I could hear was the shouting of men from upstairs. I didn’t even realize that I wasn’t alone in the room anymore.

She sat me down on the bench in front of my house and told me to stay there. I obeyed, even though I wanted to run as far away as I possibly could.

I sat there as officers and paramedics came in and out. They carried out a large, black bag but I completely ignored them. I didn’t want to believe this was real.

A car came speeding down the road, parking crazily in front of my house. A woman jumped out of the drivers seat, and I realized it was Detective Blu.

“Hydrangea you might want to sit down for this.” He told her, trying to sooth her.

“I don’t have time for this, tell me what happened!” She screamed. I’ve never seen her so out of control.

“There was another murder.” He told her quietly.

“Murder? Who was it?” She whispered.

“Clover Lyn is the murderer, Tulip Lance is the victim.” 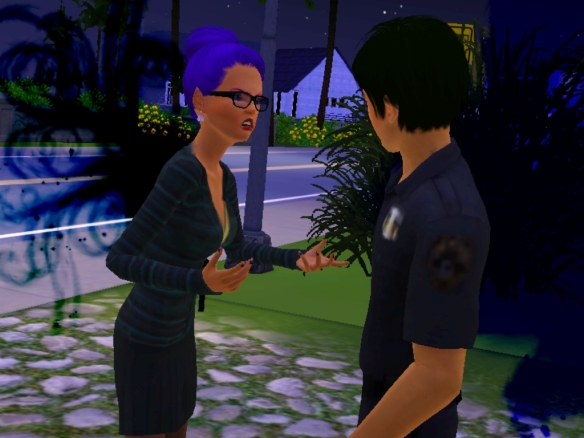 “Don’t lie to me, Maxwell. This isn’t funny.” She yelled at him.

“This is impossible.” She buried her face in her hands and started to sob. “Not my baby sister.”

“Come sit.” Officer Freedman wrapped his arm around her shoulders and guided her to the bench I was on. 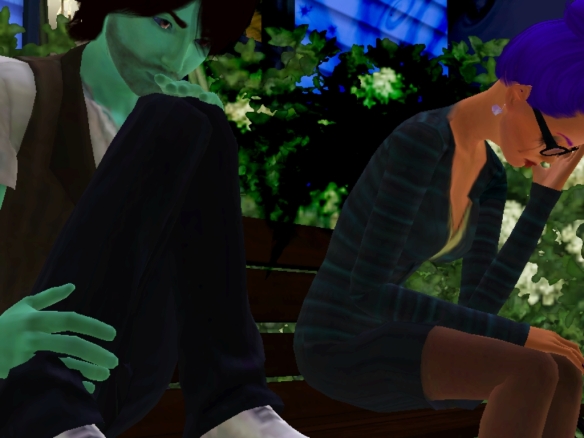 “This is all my fault.” She sobbed.

“I knew Clover killed Gardenia. I knew it, and I didn’t get her away from my sister. I didn’t think she’d strike again.”

“Clover? Yea well she’s a murderer, so sorry bud but that’s over.” She was hysterical, and honestly it freaked me out.

“No. Not Clover. Tulip. We were supposed to go on our first real date tonight.” I started to cry also. Detective Blu looked at me sadly, and wiped her eyes.

“You’re a great guy, you’re the only guy worthy of dating my sister. But this isn’t your fault.”

“We don’t know that.” I buried my head in me knees and sobbed. The both of us stayed quiet until we heard the front door open again. It was my sister, her hands held Clover’s handcuffed one’s tightly against her back.

Clover looked straight ahead while being lead to the police car. She didn’t even glance over at me, but I stood there and stared at her. She had blood on her chin and her hands. She has a wild look in her eyes and her hair was flying in all directions. She looked nothing like the Clover I used to know, the Clover I used to love. She’s murdered the only two woman I’ve ever loved.

And she never even gave it a second thought.

A/N Hey guys, I know Primrose’s generation was a lot shorter, but River’s is only halfway done. He’s gonna have at least 20 chapters. Thanks so much for reading, I say this all the time but I really mean it. I’m so sorry this chapter was such a downer, but it had to be done.